Tim and Pru West are filming #GreatCanalJourneys on the Leeds Liverpool and were at Bank Newton yesterday. 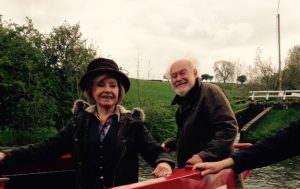 Great to have them filming on the longest single canal in the country, the Leeds Liverpool, yes  I know the Grand Union is longer but it is a union of canals! It is particularly good as it is the bi-centenary year of the opening of the canal. Leeds to Gargrave and Liverpool to Wigan were opened many years prior to 1816 but shortage of money and the Napoleonic wars saw the completion of the canal stalled till 1816.

They really are a lovely couple and the Great Canal Journeys programs are a super showcase for our wonderful canal system. They seem to be covering all of it, along with the pieces they have done abroad.

Not sure when the program will air but will look forward to seeing it and am very interested as to what bits they will choose to highlight, beyond the obvious and iconic Bingley 5 Rise and probably the now very pretty Wigan flight. Of course the Liverpool link past the Three Graces and under Pier Head, oh I could go on and on and normally do, but we will have to await and see.

They were in a hire boat this time and look to be enjoying the trip, we well know that the demands of film crews can drag out going through one lock to well over an hour, but they are hardened pro’s so seem to cope very well with all the rigours of filming. it has caused great excitement along the cut with everyone saying that Tim and Pru are on their way. interesting how we seem to feel we own celebs. so can use their first names.

Do look out for the Great Canal Journeys program  on the Leeds Liverpool, as soon as we know when it is coming out we will let you know.

This site uses Akismet to reduce spam. Learn how your comment data is processed.