So good to see so many boats heading to Liverpool. We were proud to share the route in with two historic boats, Ambush and Ribble. 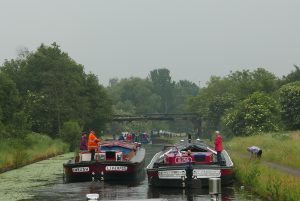 Thanks to the National Historic boat register for the following:

AMBUSH is a Leeds and Liverpool longboat, a narrow boat of steel plate construction with a Gardner 41W diesel engine. She was built by W J Yarwood of Northwich in 1933. She was built and worked for H R Ainscough.

After trade finished, she was used to carry coal to Westwood Power Station in Wigan and later was turned into a trip boat in the Liverpool area.  AMBUSH is one of a small number of Leeds and Liverpool long boats and in 2011 was under full restoration by her present owner.

Basically short boats were 60 by 14 foot and long boats 70 by 14 foot. Sometimes the flyboats were narrower. Above Wigan only the shorts could operate, due to lock lengths and curves. Thought was given to lengthening the locks around the end of the 19th century but it was going to be too costly and complex. Also comment was made that the locks at Johnson Hillocks were poorly made, unusually as most of Rennies builds were excellent.

This site uses Akismet to reduce spam. Learn how your comment data is processed.